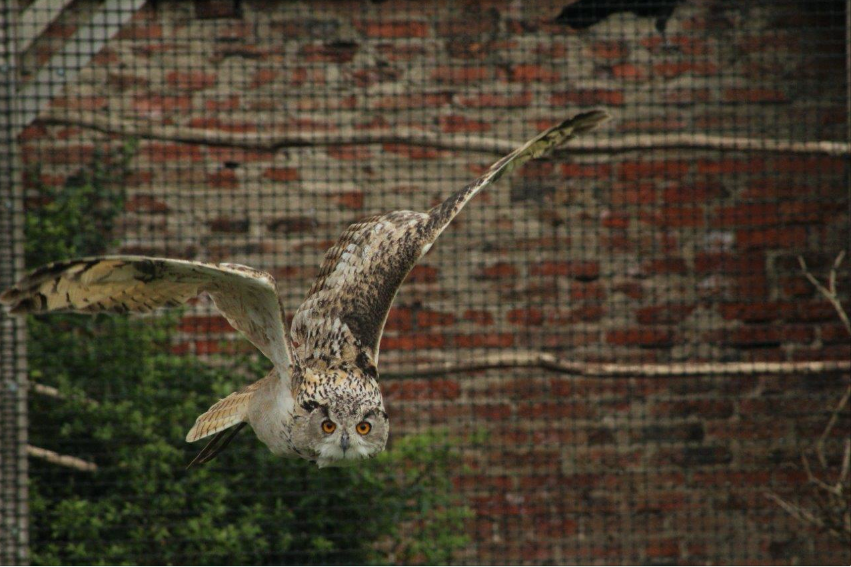 A new breeding pair of Turkmenian Eagle Owls has been introduced at Thorp Perrow, with early success evident having laid two eggs recently.

It is believed there are only 26 individuals in captivity throughout Europe, and until recently, only a single breeding pair in the UK.

Thorp Perrow added a pair of these majestic owls to their extensive collection, taking the total at the Bird of Prey and Mammal Centre to 4 individuals and in doing so, created the second breeding pair to be found in the UK.

The new pair of owls has spent time adjusting to their new home at Thorp Perrow and becoming acquainted with one another and have now laid their first eggs. The hopes are that these eggs will hatch healthy chicks in about 40 days and that the pair may go on to produce a second clutch later in the year.

Owner and Manager of the Bird of Prey and Mammal Centre, Tom Graham said “The Bird of Prey team is delighted with how quickly this pair have settled. It is very important that the species numbers continue to rise in captivity as there is little data on the wild population of these beautiful owls.

The success of this breeding pair is echoed by many others in previous years, in particular Peregrine Falcons and Merlin Falcons and is testament to the work done by the team at the Bird of Prey and Mammal Centre at Thorp Perrow to upgrade and improve the birds’ habitats.

Tom Graham said “The aviaries in the Bird of Prey and Mammal Centre are currently being upgraded to improve habitat and ensure birds welfare and comfort. The birds are obviously happy with their environment, which they demonstrate by breeding successfully.