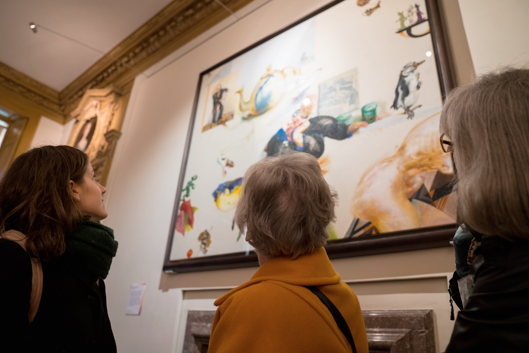 Judi Dench, Darcey Bussell and J.K. Rowling are just some of the creative women you’ll see in a new display of portraits from the National Portrait Gallery at Beningbrough Hall, Gallery and Gardens.

Over four galleries, the exhibition ‘Making her mark – celebrating creative women’ has some famous and familiar faces from contemporary creative arts transforming this 18th century hall’s walls. The display showcases a series of diverse portraits varying in scale and media recognising some key British women who have made their mark in the worlds of writing, art, music, performance and dance. There are some additional features with a costume from The Duchess worn by Keira Knightley in her role as The Duchess of Devonshire and an interactive jukebox to play as you enjoy the portraits of Amy Winehouse, Grace Jones, Neneh Cherry and Dame Janet Baker.

Jane Whitehead, Visitor Operations Manager at Beningbrough said “This new exhibition is an exciting and bold step for Beningbrough with portraits themed through several rooms. It will showcase some of our most influential female creators in the arts such as Dame Barbara Hepworth and Dame Darcey Bussell.”

2018 marks the significant 100th anniversary of women gaining the partial right to vote and the National Trust has chosen to recognise British women who have influenced our society with exhibitions and events throughout the country celebrating ‘Women and Power’. In North Yorkshire, Beningbrough Hall is hosting the new exhibition in partnership with the National Portrait Gallery which celebrates women who have made a significant contribution to our cultural landscape. The exhibition in four of the principal rooms on the first floor of Beningbrough Hall makes it the hall’s largest temporary display since opening in partnership with the National Portrait Gallery in 1979.

Alison Smith, Chief Curator at the National Portrait Gallery said “We are delighted to be sharing portraits of some of the most exciting and influential creative women of the last 100 years. These include significant Gallery commissions of Dame Judi Dench, Dame Janet Baker, Dame Helen Mirren, Dame Iris Murdoch and Dame Darcey Bussell. These remarkable women are an inspiration to future generations.”

‘Making her mark – celebrating creative women’ runs from 3 March until 4 November 2018 at Beningbrough Hall, Gallery and Gardens, YO30 1DD.