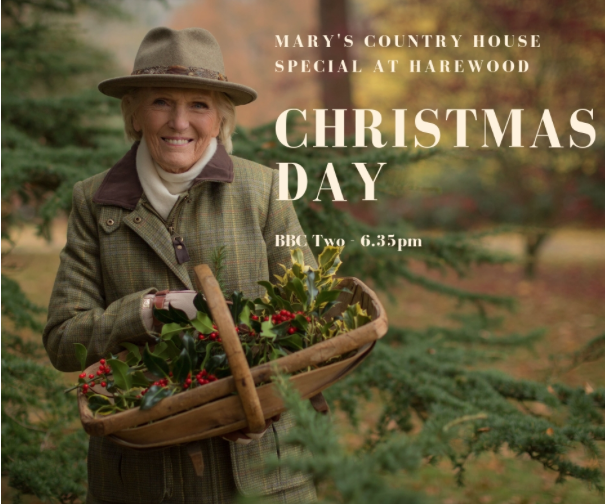 Christmas just got an extra sparkle as Harewood House reveals that ‘Mary Berry’s Country House at Christmas’ has been filmed and the one-hour programme, which will air on BBC Two in December, is one of the highlights of the BBC’s Christmas season.

It features stories from across Harewood, including tales from the House and gardens and the focus of this year’s 1929 Christmas Eve story. The traditions from past and present are woven together with scenes of Mary cooking in the copper-pan adorned Below Stairs kitchen, with recipes including traditional Twelfth Cake and Yorkshire Pie.

The crew filmed for two weeks at the beginning of November when Harewood was closed to the public. Stories expected to be featured across the episode range from the Walled Garden to the Private Apartments and incorporate some of the talented and generous Harewood volunteers spending time with Mary whilst they make wreaths for the House and decorate gingerbread that will play a role in the setting for visitors.

David Lascelles, Earl of Harewood and Chair of the Board of Trustees, also took Mary on a wider tour of the Harewood Estate, bringing the family’s history to life.

Jane Marriott, Harewood House Trust Director, said; “We had two wonderful weeks with Mary Berry and the crew, whilst they explored the many stories at Harewood. Christmas in the 1920s, is one of these unique stories, which we have brought to life, in an enchanting and magical way, created especially for us by Simon Costin. Continuing our ambition to work with the best Artistic Directors in this country, we are delighted to now have the opportunity to broadcast this nationwide and to share the traditions of Christmas at Harewood, through the eyes of two little boys in the 1920s, celebrated in Mary Berry’s programme.”