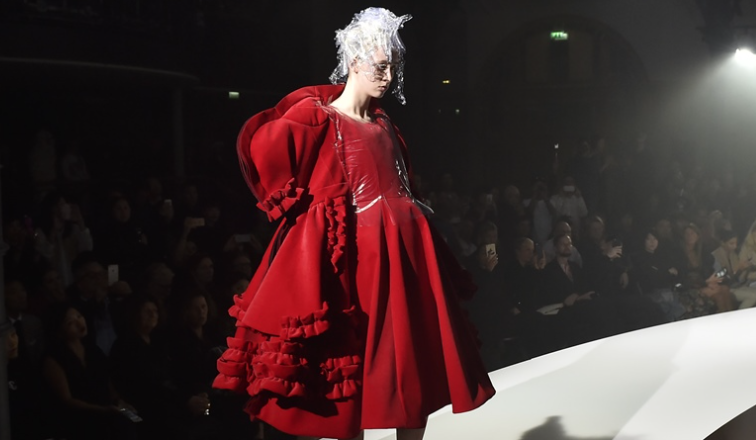 A sense of anticipation and excitement currently pervades The Bowes Museum as the countdown begins to the opening of its exclusive summer exhibition, CATWALKING: Fashion through the Lens of Chris Moore, which opens on 7 July.

Moore was one of the first photographers to capture live fashion when Parisian salons opened their doors in the late 1960s and has remained at the forefront for over 60 years, still producing stunning images from every major catwalk show.

Spread across three large galleries, this comprehensive study of the fashion industry will bring together some 230 of this revolutionary photographer’s original images, charting the evolution of fashion as captured through his lens. These amazing pictures will be presented alongside 40 original catwalk outfits in a unique collaboration with the world’s leading fashion houses. They include exclusive unseen 1970s photographs from Yves Saint Laurent catwalk shows, which will complement loans from Musée Yves Saint Laurent, Paris.

Spanning more than half a century, the 40 garments represent era-defining catwalk moments. From Paco Rabanne’s 1960s chain-link modernism to a Dior gown from Galliano’s unforgettably extravagant Spring/Summer 1998 show, each piece captures the spirit of the time in which it was created.

Straight off the catwalk, direct from Versace’s 2018 Tribute Collection – which brought the original supermodels together in homage to the late designer – is a reinterpretation of the Marilyn Monroe Pop Art dress worn by Naomi Campbell in 1991.

Also featuring are seven Alexander McQueen outfits, including the golden feathered frockcoat from his final Angels and Demons Autumn/Winter 2010 Collection, and two previously unseen looks by Sarah Burton, creative director, the designer of the Duchess of Cambridge’s wedding dress. Only Moore, as in-house photographer, was invited to photograph McQueen’s last intimate show after his death, recalling how “. . . the music alone was enough to make me cry.”

An unusual feature of the exhibition will be a paper catwalk created by installation artist Steve Messam, acclaimed for his weight bearing bridge across a Lake District stream constructed from 20,000 sheets of bright red paper, the images of which went viral on social media

The ‘catwalk’ is made from over 5,500 pure white paper tubes. It’s another structural piece designed to be load bearing as a functional catwalk. The mass of tubes – up to 4m in height – wraps around the pillars down the entire length of the exhibition gallery.

Joanna Hashagen, the Museum’s Curator of Fashion and Textiles, said: “This is the first retrospective of Chris Moore’s work; a tribute to a man whose important contribution to the fashion industry is widely recognised. He has photographed all the key fashion moments of the last 50 years.  He has documented the rise of the supermodel and the changes in the way shows are presented.  But his shots are not just limited to the catwalk, his candid eye has captured behind the scenes moments too.

“I am delighted that the fashion houses have been so generous with loans to this exhibition, a testament of their regard for his work.  We are delighted to be able to present this unique fusion of photography and fashion in one significant exhibition.”

CATWALKING: Fashion through the Lens of Chris Moore will pay a fitting tribute to Moore’s long and illustrious career. The exhibition opens on 7 July 2018 and runs until 6 January 2019.