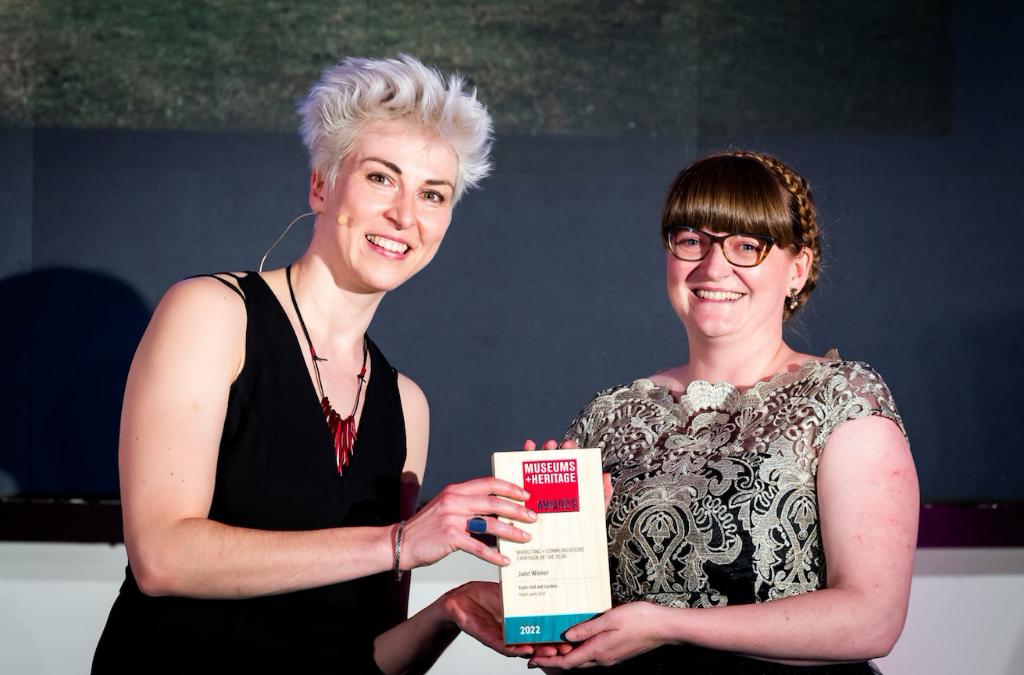 Staff from the intimately presented historic house Kiplin Hall & Gardens attended a glittering ceremony in London last week. The black-tie event was quite the contrast to their day jobs at the small museum which is nestled in rural North Yorkshire between the market towns of Northallerton and Richmond.

The Museums + Heritage Awards are known in the industry as the ‘Oscars of the museum world’. Previous winners have included Sir David Attenborough alongside hundreds of individuals and organisations from across the cultural sector. The ceremony itself took place in a ballroom near Trafalgar Square, hosted by Iszi Lawrence, a historical fiction author, presenter, comedian, and podcaster.

“The awards have become the gold standard in the sector and the recognition that winners receive is a key motivator for staff and volunteers alike, boosting confidence by having their work promoted on a global scale.”

Kiplin Hall and Gardens received two awards at the event. Coming home with ‘highly commended’ for museum café of the year and Joint Winner for marketing campaign of the year. Shortlisted among giants of the heritage sector including Imperial War Museum and Stonehenge the win marks a huge achievement for Kiplin which is going through a phase of development and growth, fueled in part by its growing popularity with visitors post-covid.

Samantha Jennings, Marketing Officer for Kiplin Hall and Gardens spoke of her shock and delight when receiving the award on stage.

“I suddenly feel like a very small fish in a very big pond! Considering that it is my job to talk, I feel lost for words, but I know there are two groups of people I must thank. Firstly, the volunteers, staff and trustees at Kiplin Hall. Without their hard work I would have nothing to talk about. And secondly the local press who have helped us to promote Kiplin in our communities, not least The Northern Echo and The Darlington & Stockton Times. Where I come from print is certainly not dead!”

Kiplin’s 2021 marketing campaign aimed to go local; attracting first time and repeat visits from residents living in the surrounding towns and villages. The concept of a ‘destination on the doorstep’ gained popularity as people stayed local while lockdown restrictions eased. Kiplin reported record breaking visitor figures in 2021, welcoming just over 30,000 visitors, a 65% increase on their previous best. Kiplin Hall and Gardens is an independent museum reliant on ticket income.

At Kiplin visitors can enjoy the historic house museum, tea room, ample gardens & grounds. The museum tells the stories of 400 years worth of family ownership via the Calverts, Crowes, Carpenters, and Talbots who were all grounded in North Yorkshire but made their mark around the globe. Lakeside paths and woodland walks offer tranquil routes to explore the formal gardens and open parkland. The Tea Room is known for it’s freshly made cakes and bakes, using ingredients grown in the walled garden on site. Just days before the Museums + Heritage Awards Kiplin’s tea room team also landed the Readers Choice Award at the Flavours of Herriot County Awards following a public vote in The Darlington & Stockton Times.

Find out more about Kiplin Hall and Gardens at www.kiplinhall.co.uk